The natural beauties of the landscape and the sea, plus the architectural and historic heritage, climate, and geographical position between Pollino National Park, the Sibari plain and the Metapontino area create a tourist attraction with great appeal among the routes of Calabria.

The image the visitor has is that of a pyramid that flanks the slope of the Rocca and gently dips down to the plain.

The Rocca toponym has been linked to a reconstructed form of vulgar Latin rocca meaning rock or cliff but also as a fortified place, a fortress rebuilt in a high place. The old village climbs up a hill with the houses arranged on terraces at the foot of the fortress which gave its name to the village. It still has the appearance of a mediaeval village with its lanes, steep climbs, the old bell tower and military constructions.

The image the visitor has is that of a pyramid that flanks the slope of the Rocca and gently dips down to the plain. There are 7 kilometres of beautiful beaches at the foot of Rocca Imperiale made up of cliffs, pebbles and fine golden sand, like the San Nicola and Lungomare beaches, which offer a marvellous view of Svevo Castle dominating the top of the hill. The beaches at Rocca obtained two sails in the Legambiente Blue Guide. The village is considered as a ‘natural open-air set’ by many directors because of its features. Pupi Avati defined it as such after filming Le nozze di Laura there in 2015 but the Italian comic actor Totò, star of Destinazione Piovarolo, had already been among the lanes of Rocca Imperiale in 1955. Other places to visit in addition to the Swabian castle include the Friars Minor Monastery, which has a cloister with cistern, portico, cells and church, and contains the captivating Waxworks. The structure of the mother church, dedicated to the Assunta, is in pure Romanesque style. The Turks landed with 4,000 men to take the fortress on 29 June 1644; they were unsuccessful but retaliated by setting the church on fire. Fortunately, the elegant 13th century, Sicilian-Norman bell tower and 14th century rose window were undamaged. The chapel of the Rosario is also worth a visit to see the wooden 18th century statues of a Neapolitan school and the 17th century sculpture of the Madonna del Rosario on the main altar.

The imposing Swabian castle of Rocca Imperiale is on the top of the hill over which the whole residential area extends. The fortress was ordered by Frederic II of Swabia in 1221, and he ordered the construction or refurbishment of 200 castles for defensive purposes in southern Italy. The castle was built in a place of great military and strategic importance and surveillance extended to the whole of the Gulf of Taranto.
The development of the residential area followed the construction of the castle, bringing in the people from a series of fortified settlements in the area. Many feudatory lords alternated in the government of the area, constantly under barbarian attack, in the following 200 years. In 1664, the castle withstood the attack of 4000 Saracen pirates who devastated Rocca, destroying the old 13th century church in the old centre of which only the lovely Romanesque bell tower with mullioned windows and cornices remains. In 1989, the last heirs of the family owning the castle decided to donate it to the Municipality of Rocca Imperiale.

The Rocca Imperiale Museo delle Cere (Waxworks) is hosted in the old Friars Minor Monastery and offers a sensational and suggestive atmosphere through the spectacular combination of the sacred and the profane. Many personalities are represented in the waxworks, with refined, sharp similarities of those people who were the symbols of the 20th century, contributing to shedding light on and giving economic, artistic, cultural, political, religious and social depth to Italy and the whole of mankind.
From Frederic Il of Swabia to De Gaspari, Mussolini to Che Guevara, Mother Teresa of Calcutta to Rita Levi Montalcini, and Giuseppe Verdi to Totò, all naturally sized with glass eyes and real hair adorned by more than real clothing. The Waxworks can be visited every day and is the theatre of many artistic and cultural initiatives such as art exhibitions, theatrical presentations, film shows and also musical and folklore events.

The Federiciano is an important poetry festival organised by Aletti Editore with the Municipality of Rocca Imperiale held every year in the last week of August. Thousands of poets from all over Italy and abroad come to Rocca Imperiale during the days of the event. They not only take part in the poetic side (reading poetry aloud and impromptu poetry) but also enjoy the full calendar of the Festival, which ranges over various types of artistic speciality. The poetry competition linked to the Festival promises a unique award for the two winners - immortalise the works on majolica pottery stele, set on the walls of the houses. The project started from the idea of creating an ideal poetry house in the place founded by Frederic II (to whom the prize is dedicated), who was the first creator of a school of poetry in Italy - ‘La Scuola Siciliana’ (The Sicilian School). Rocca Imperiale has thus rediscovered its original literary vocation with the return of poets to the court of Frederic II, turning his village into an open-air anthology, where poetry becomes an integral part of urban decoration. The traveller can discover the verses of emerging authors, chosen from those taking part in each edition, in the narrow streets of the old centre. Then there are also those of the great classics such as Leopardi, Foscolo, Quasimodo and Pirandello, and personalities from the world of Italian and World culture who, at the invitation of the organisers, donate their verses to the event, thus taking part in the development of the ‘Il Paese della Poesia’ project. Participants include Dacia Maraini, Alda Merini, Mario Luzi, Manlio Sgalambro, Maria Luisa Spaziani, Lawrence Ferlinghetti, Eugenio Bennato, Omar Pedrini, Alejandro Jodorowsky, Mogol, Mango and Pupi Avati. 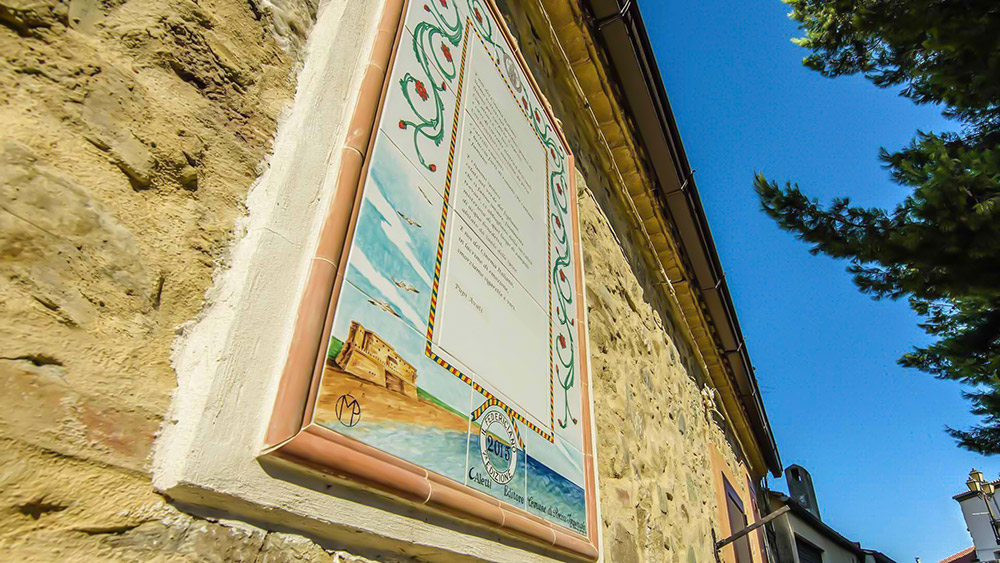 The village of the cinema

The cinema has earned its place as one of the excellences of Rocca Imperiale. Rocca was chosen from dozens of locations to make a film uniting ideals and the religious ‘miracle’ with the current problems that the south of Italy is unable to separate itself from, and which harm both the land and mankind. The film was directed by the maestro Pupi Avati who, at the time, defined Rocca Imperiale as a “natural film set”. The film is strong, full of allegorical meanings set in a modern, contorted situation which a director like Avati wove in a new way. The film is 90 minutes long and Rocca Imperiale, with its places and panoramas, entered the hearts and minds of 4,284,000 spectators, and a share of 17.48%, also moving outside Italy, taking part in the 5th edition of the Italian Contemporary Film Festival of Toronto in 2016. Just one year after the film was seen, the number of tourists visiting Rocca Imperiale had increased significantly - thousands of people fascinated by the location decided to see it in person.

The  Rocca Imperiale area has a micro-climate ideal for the cultivation of fruit trees, and the lemon in particular, with mild winters and temperatures that never drop below 0°C. As a result, it has the most significant lemon production of the whole of the province of Cosenza and the upper Ionian. It’s a real ‘Oasis’, an environment that has certainly had a positive influence on the features of the product. The Limone IGP (PGI lemon), cultivated for centuries in the Rocca Imperiale area, is known in the district as ‘Antico o Nostrano di Rocca Imperiale’ (Old or Ours of Rocca Imperiale). The fruit of the lemon tree, intense yellow in colour, has an extraordinary scent that makes it stand out from other lemons. The results of tests have shown a high content of limonene and precious natural scents of essential oils with a particular aroma. The Limone di Rocca Imperiale produces three types of fruit from three flowerings throughout the year - Primofiore (picked from May to July), or Maiolino (picked from May to July) and Verdello (picked from August to October)

Rocca Imperiale cuisine has its roots in traditional Mediterranean food and offers many different traditional dishes due to the products of the land and sea. These include the Frizzul ca’ millic (maccheroni with sauce and the soft inside of a bread roll), laganelli e ceci (pasta without egg and chick peas), roast kid and pork, chilli peppers and fried aubergines, muffit (a pie with pork scratchings) and lemon cake.