Despite its name, Isola Capo Rizzuto isn’t actually an island but a beautiful promontory in the province of Crotone on the eastern side of Calabria.

It’s a wonderful area within the Marine Reserve, between Sila Park and the Ionian Sea, in one of the most attractive areas of the whole Mediterranean.

The Greeks were fascinated by Capo Rizzuto, so much so that they settled colonies that became ports for cultural exchange.

The coastal landscape is marked by crystal-clear water and extraordinary beaches, basking in the Mediterranean climate. Summer at Capo Rizzuto is from May to October, enabling visitors to enjoy beach life for several months. 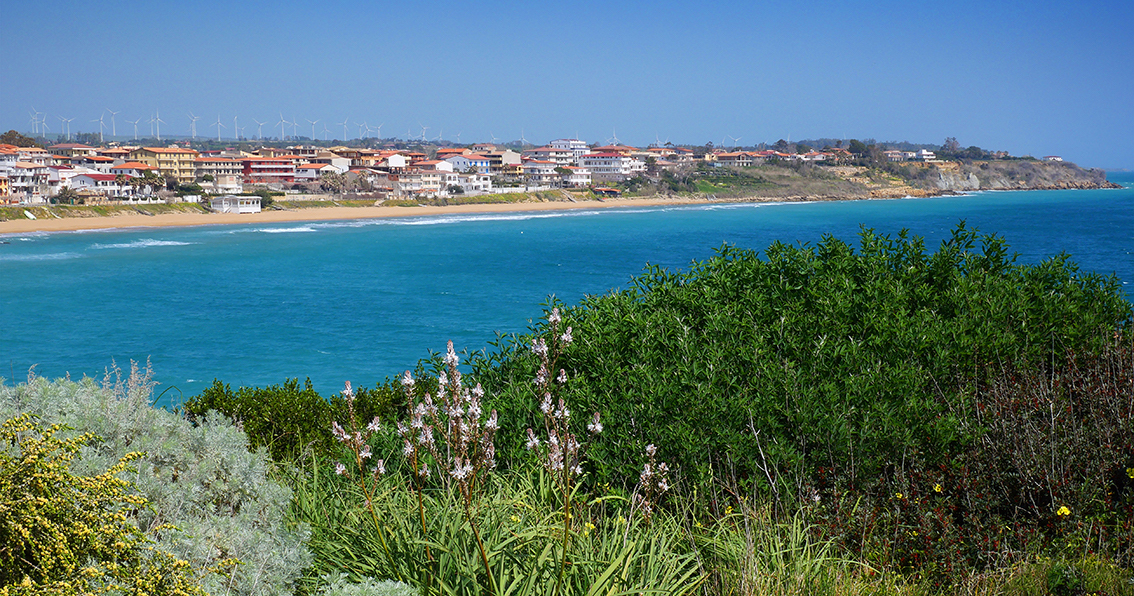 The marine habitat around Isola di Capo Rizzuto has enormous naturalistic value and the Marine Reserve was set up to protect this precious stretch of coast. A paradise for sea lovers, who can visit the CEAM Aquarium, a little reserve where some marine habitats have been recreated, and the flora and fauna of the Reserve can be seen. The town has also received the Green Flag award, assigned by the Fondazione per l’Educazione Ambientale (Environmental Education Foundation) for the best beaches in Italy for families with children. Pier Paolo Pasolini was charmed by the wild, unpolluted beauty of the area and shot part of his film Il vangelo secondo Matteo (The Gospel According to Matthew) there in 1964. Other artists have been inspired by these places, choosing them as the locations for their films. The 1987 film ‘Il Coraggio di Parlare’ (The Courage to Speak), directed by Leandro Castellan, was shot in Capo Rizzuto and Cirò Marina. The film won the Grifone D’Oro at the Giffoni Film Festival. The Aragonese castle was the location of Mario Monicelli’s film ‘L’armata Brancaleone’ (For Love and Gold) in 1966.

The Greeks were fascinated by the area of Capo Rizzuto and set up some colonies which became gateways for trade and cultural exchange. The closeness to Crotone stimulated both the increase in local agriculture and trade interchanges with the Greek poleis. Churches, monasteries, houses and cultural centres were built during this period but, unfortunately, only the Juno Lacinia column, on the promontory known as Capo Colonna, is left as a splendid, unique testimonial. Isola Capo Rizzuto’s old vocation for exchange is still very evident in cultural events, and the Festival of Peoples, an initiative centred on multi-culturalism, is a dazzling example. In the middle of summer, a great deal of attention is paid to local products with the Sagra del gusto, Saperi e Sapori del Mediterraneo (The Celebration of Taste, Mediterranean Knowledge and Flavours). The event aims to valorise traditional local products with tastings of the best delicacies from the Crotone area. The local economy has always been connected to fishing, and Capo Rizzuto still has an important role. The preferred agricultural product is fennel, which has earned the Protected Designation of Origin (PDO) label; fennel from the area has an appreciative international market. In recent years, tourism has become more and more important, mainly due to the hamlet Le Castella which has become one of the most visited and best-known places internationally. In addition, the archaeological sites and imposing Aragonese castle, which rises from the sea, bring added value to an area of great natural unpolluted beauty.

One of the symbols of Isola di Capo Rizzuto is the Aragonese castle at Le Castella. It was built on a small island just off the coast in an extremely evocative position. The castle can be reached on foot at low tide by crossing a narrow spit of land, which disappears completely at high tide. The area is very attractive and the castle has been restored several times to enable visits from the many tourists. The castle has such a beautiful structure that it is often chosen as the set for film and advertising shoots.

One of the best-loved religious festivals is certainly the Festival of the Madonna Greca, celebrated in May and August. According to legend, a Calabrian fisherman found a sacred icon depicting the Madonna with Child on a beach. The painting became the source of various miracles and a sanctuary was built in its honour. The icon of the Madonna is carried in procession around the town during the traditional ceremony before being lifted onto a boat that crosses the sea to the neighbouring villages. The enormous number of flowers brought by visitors to the procession make it even more evocative, and these accompany the return of the icon to the sanctuary while the whole town celebrates.

Visitors to Isola di Capo Rizzuto are spoilt for choice with delicious dishes, like the sardeddra, Calabrian caviar consisting of whitebait blended with chilli pepper, or rice and fennel, with wild fennel chopped into pieces, covateddri, small, durum wheat flour gnocchetti (small dumplings) made by hand with the aid of a special wicker basket, seasoned with a pork sauce. There are plenty of desserts, too - pitta cc'u l'ojjhu, many layers made with wine and olive oil, filled with almonds, raisins, honey and cinnamon, and tardiddri, gnocchetti coated in and mixed with honey, vino cotto and sugar and then fried.